Dolmabahçe Palace in Istanbul was built as a modern ‘European’ style palace for the ruling Sultan of the Ottoman Empire. It sits in a prime position overlooking the Bosphorus, with views towards the Asian side of the city. The palace was completed in 1856 and is very different in style to the old Topkapi Palace in the old city, which consists of small buildings set around a series of courtyards. Although Dolmabahçe is reminiscent on the outside of great European palaces like Versailles and Schönbrunn, it feels much more Asian on the inside. 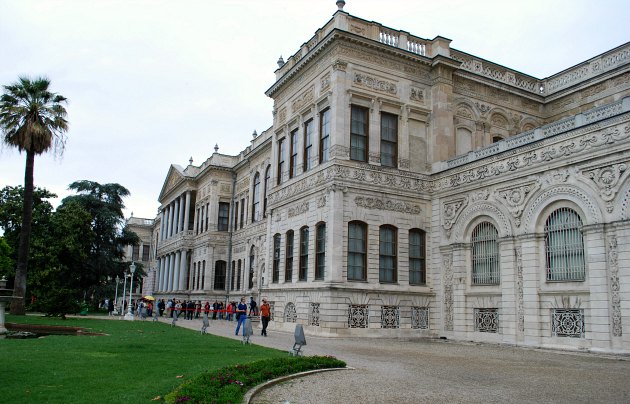 The palace is split into two sections, the state apartments and the private apartments, known as the ‘Harem’ section. Tours take place of both sections separately in English and Turkish and are led by expert guides. They will take you through significant rooms in each area, stopping for a brief explanation every so often. Whilst we enjoyed having a tour guide, in many areas of the palace there’s not enough room to talk to the entire group, so instead you’re gathered somewhere else and then told what you’re about to see before walking as a group through it. As such the tours can be a little confusing as sometimes you’re not sure what you’re looking at and the guide is too far away to ask.

Dolmabahçe Palace has a number of notable rooms that you’ll see during the tours. Firstly there’s the salon which joins together the state apartments and the Harem section (pictured above). The styles of the two sections of the palace are very different. The state apartments are opulent in decor, space and furnishings whilst the Harem section, where the Sultan actually lived, is more simple and understated. The salon is interesting because it has a bit of both. It feels homely and lived in, but also looks like no expense has been spared.

Another ‘homely’ touch in the Harem section are the ornate, tiled, wood burning heaters in each of the rooms. Every one is different but beautiful. We also liked the Sultan’s marble bathroom in the state apartments (pictured above) which has a terrific view over the Bosphorus. On the tours of the palace, the most impressive room is saved until last. It’s a full height ceremonial hall, complete with one of the world’s most impressive chandeliers.

Dolmabahçe Palace is open from 9am to 4pm everyday except Mondays & Thursdays. A combined ticket offering adult admission to both sections is 40TL (2016 prices). The palace has a daily capacity of 3000 people and as such the ticket office will close early if that number has been reached. There are a number of tour options which include the palace here:
Istanbul Tour with Bosphorus Cruise including Dolmabahçe Palace
Dolmabahçe Palace Tour

Dolmabahce Palace is in the Besiktas area of Istanbul and is a short walk from the tram terminus. We used the Istanbul Big Bus Hop-on, Hop-off Tour to get here as it stops right outside.

MORE ON THE DOLMABAHCE PALACE