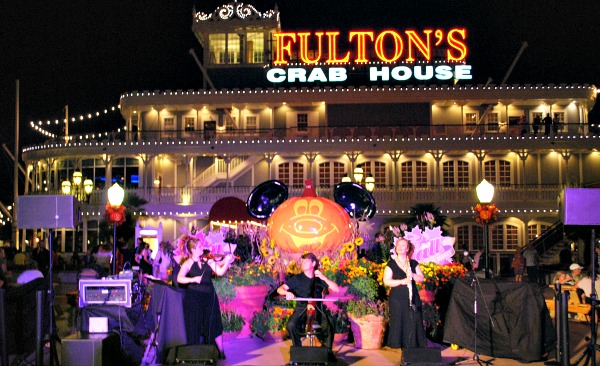 This is like Disney’s version of a city center and the walkways are packed with restaurants, experiences and shops. Parking here is free, and it really comes alive at night when the atmosphere is brilliant. There are street entertainers offering music and comedy and just walking from one end to the other will take you up to half an hour. Look out for the free boat service that links the two ends by taking you across the lake. The centrepiece ‘experience’ is a huge balloon which raises groups of people up to the sky for what must be a fantastic view of the Disney parks but it was closed because of the wind on most of the days we visited. There’s also a Cirque de Soleil theatre here and a cinema. 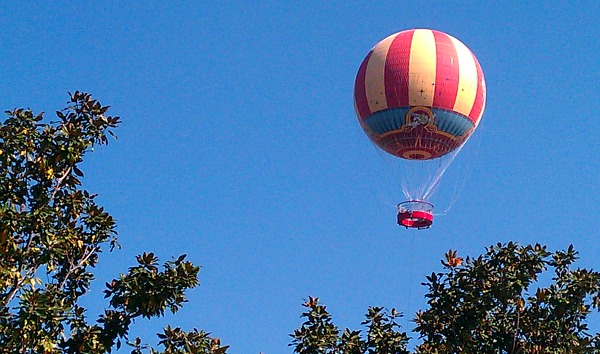 The balloon experience (pictured above) is officially called “Characters in Flight” and is a new-look design. The old one was removed and inspected after an accident with a similar balloon in Hong Kong.  If you wish to ride, the balloon operates from 8.30am to midnight daily with adult tickets costing $20 and children $15. If you get up early, then there is an early-bird offer before 10.30am of $10 per person (2018 prices). As mentioned above, if the weather is too windy, the balloon will not fly.

There are lots of eating options at Disney Springs, but we tried two of them. The House of Blues has its own concert venue next door and serves decent traditional american fare – we particularly liked its imitation water tower! The other place we ate was Planet Hollywood which is more about the movie memorabilia than the food to be honest. Even if you don’t want to eat there, you can still see one of the boats used in the film Forrest Gump moored outside… 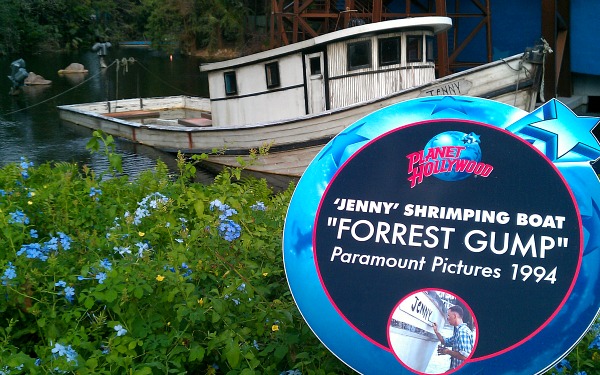 Other restaurants at Disney Springs include the Rainforest Cafe, T-Rex Cafe, The BoatHouse, Wolfgang Puck, Raglan Road Irish Pub, Portobello, Paradiso 37 (a taste of North & South America) and Bongos Cuban Cafe. There are also plenty of snack-type eateries if you don’t want a full meal too and don’t forget to pop into Ghirardelli’s shop for a free chocolate sample!

Aprt from the Characters in Flight balloon mentioned above, the main entertainment options at Disney Springs include… 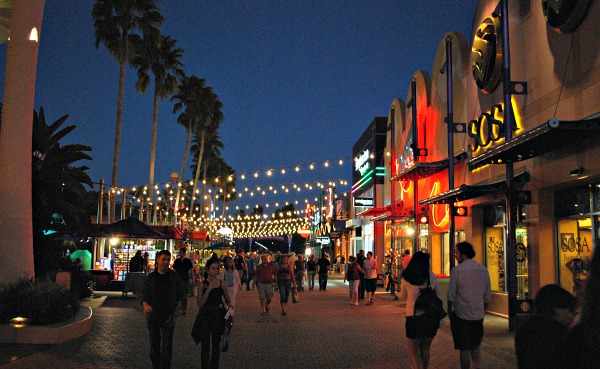 There are lots of shops at Disney Springs, but most of them only sell Disney merchandise. The exceptions include the Harley Davidson store, Arribas Brothers (which sells crafts) and Something Silver.

Most stores and experiences at Disney Springs operate from 9.30am to 11pm or midnight.  If you want to go to the nearby Disney parks, see the various ticket options with latest prices here. Also, see our pages on the other Disney Attractions in Orlando…
Disney’s Magic Kingdom
Disney’s Animal Kingdom
Disney’s Hollywood Studios
Disney’s Epcot
Disney’s Typhoon Lagoon Water Park
Disney’s Blizzard Beach Water Park

Disney Springs is sign posted on the main entrance roads for Walt Disney World and also from the I-4.