If you have time on your trip to London to spend some time in leafy Greenwich, we’d thoroughly recommend it! There’s loads to do in the borough, all within easy walking distance of the DLR station.  Here are our top 10 suggestions… 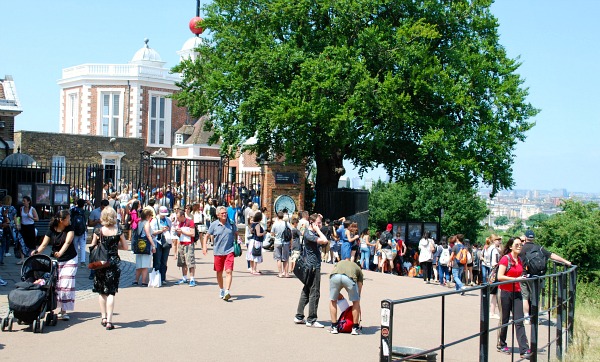 1. The Royal Observatory – This is the home of the Greenwich Meridian which gives its name to Greenwich Mean Time. There are two main areas to visit – The Astronomy Centre and Flamsteed House which stands in the Meridian Courtyard.The Astronomy Centre is free and inside you’ll find a 4.5 billion year old meteorite, a history of the universe condensed into 4 minutes and your chance to be an astronomer. Flamsteed House is the attractive historic building, constructed in 1675, to be the original observatory. Henry the 8th used it as his hunting lodge too. Inside there are royal apartments, the beautiful Octagon Room and Time Galleries. The Meridian Courtyard is the area outside Flamsteed House where you’ll find the Meridian Line and your chance to stand in two hemispheres at once. Adult admission to Flamsteed House and The Meridian Courtyard is £9.50 (2016 prices) although joint tickets with the Cutty Sark are also available. 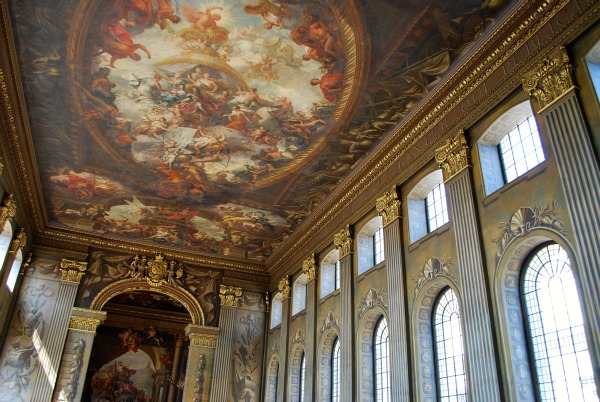 2. The Old Royal Naval College – This place is a real gem! Sir Christopher Wren designed the twin domes here and the architecture of the whole college is really imposing. After wandering around the grounds, the two big highlights are the Painted Hall (pictured above) and the Chapel. The Painted Hall is like something you’d find in a stately home, but although it might look like a ballroom, it was actually used as a dining hall and is still used for fancy dinners today. The Chapel stands immediately opposite under the other dome and it’s beautiful. Spend some time looking at the ceiling, the organ, the huge doors, the pews and the artworks. Both the Painted Hall and the Chapel are free to visit. You’ll also recognise many of the buildings here from the 2012 movie of Les Misérables. The funeral scene and the final sequence were filmed here and Javert rallies the troops for battle in the Painted Hall. So, when you visit, you’re standing in the footsteps of Russell Crowe, Hugh Jackman & Anne Hathaway! 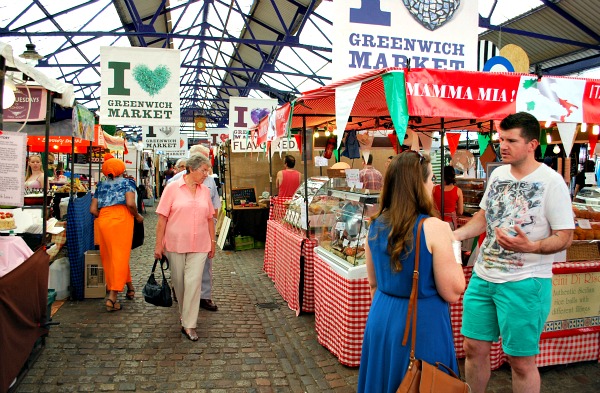 3. Greenwich Market – It might seem a bit strange to put a market so high up the list of places to visit in a borough packed with history and beautiful architecture, but this market is very special! It has a lovely atmosphere, but the produce here is top quality and there’s something for everyone from food to clothing to crafts. There are several ways to get into the market including small alleyways lined with boutique shops and once you’re inside it would be very easy to spend a fortune. The market is open every day except Tuesday.

4. Greenwich Park – This park covers 183 acres and is one of the Queen’s Royal parks and it stretches out from the rear of the Maritime Museum. There are wide open grassy areas, lots of tree-lined footpaths and lakes. The Observatory is roughly at the centre of the park with its own driveway access, but other highlights include the pavilion tea house, the deer park and the playground. It’s very much whatever you want it to be, so if you just fancy a stroll, that’s fine, but on warm sunny days you find families having picnics, joggers sauntering around, impromtu sunbathers, people boating on the lake, you name it. For us the highlight in the park though is the next thing in our top 10. 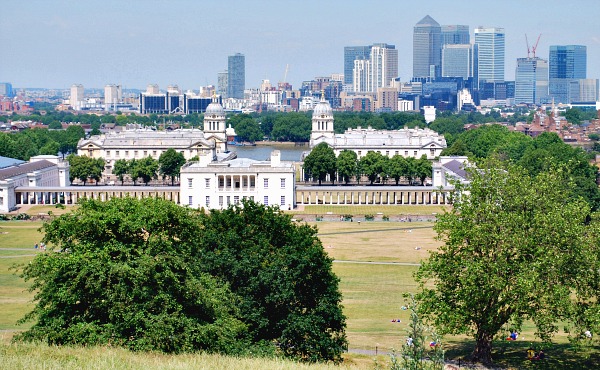 5. The London Skyline – As Greenwich Park includes a hill, you get the most fantastic view of London’s notable buildings from the top. Look to the left and you see central London with St Paul’s and the Gherkin amongst the most obvious towers. Look straight ahead and you see the Canary Wharf  area with the HSBC tower and other financial buildings. There are lots of places to enjoy this view, including the area around the statue next to the observatory, but our favourite is the long park bench nearby. 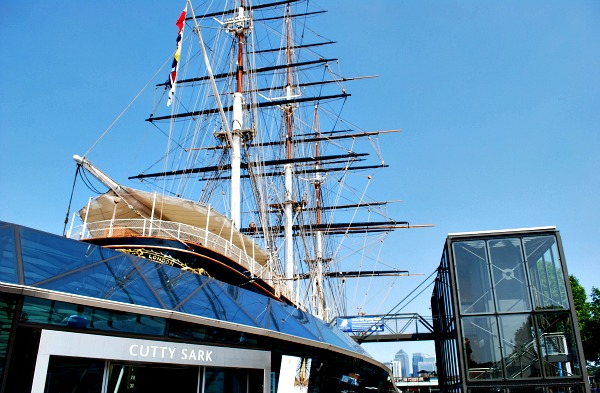 6. The Cutty Sark – This attractive ship was built in 1869 and was one of the fastest tea clippers ever made. After a short life ferrying tea though, she switched to transporting wool from Australia and held the speed record for 10 years! She was also used as a cadet training ship before finding her retirement home in Greenwich.  She was recently renovated and now stands proud on the edge of the Thames surrounded by a purpose built museum. Cutty Sark is open daily from 10am to 5pm (last admission is at 4pm). Adult tickets cost £12 (2013 prices) but you can get a joint ticket with some of the other museums in Greenwich which saves money. 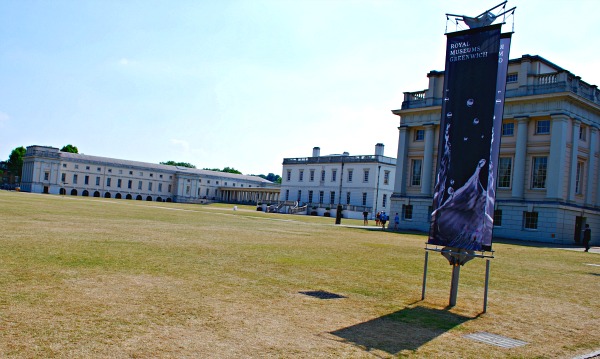 7. The National Maritime Museum – This is the world’s largest maritime museum and it’s free go in. Once inside, the building is jam packed with maritime artefacts, but we liked the World Map best, which takes up the biggest open space. It’s a sort of interactive map of the world where you can walk around the surface and experience the sea-faring connections in each place. It was packed with families when we went, all seemed to be having a great time. Elsewhere there’s Nelson’s ship in a giant bottle, a gallery on the Arctic convoys during WW2 and a large exhibition about the East India Company. The National Maritime Museum is open daily from 10am to 5pm. 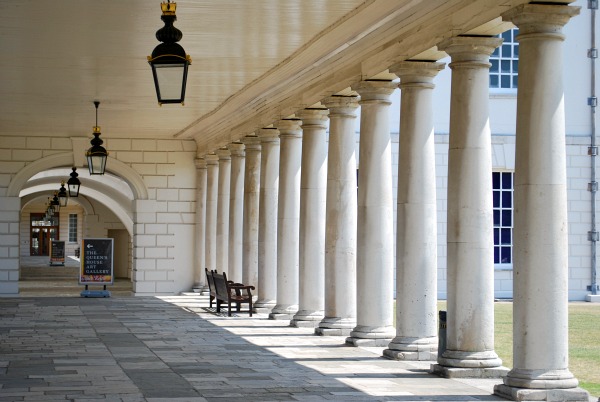 8. The Queen’s House – This mini mansion was constructed for the Queen of Charles I in 1638 and it still feels like a palace inside. There are lots of features to look out for like the Great Hall painted ceiling and the tulip stairs, but this building is now essentially an art gallery. It houses the Maritime Museum’s fine art collection with contemporary art, miniatures, oil paintings, photography, prints, drawings, watercolours and sculpture. The Queen’s House is open daily from 10am to 5pm, but closes for private events. 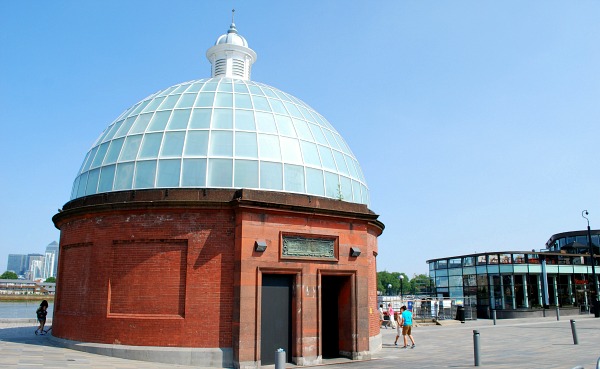 9. Greenwich Tunnel – This is a little piece of functional history at Greenwich. As London grew, the need for river crossings increased. In the city there are plenty of bridges, but further down stream, they went for the tunnel option instead to get people from their homes on the south of the river, to the dockyards on the north bank. The Greenwich tunnel, with it’s attractive dome entrances, was opened in 1902. It’s a real feat of engineering and apart from damage in WW2 and a bit of renovation over the years, it’s stood the test of time. The dockyards are gone now, but in their place this tunnel has a new significance as it now helps people to get to the Canary Wharf financial district. It takes about 10 minutes to walk to the other side and it’s worth if even if you only go to take a picture of the view of Greenwich when you get there.  The Greenwich tunnel is open 24 hours a day.

10. The Thames Path Walkway – Over the years, walking or cycling along the Thames has become a big leisure activity. The pathways are now maintained and there’s lots to see. From Greenwich, you can join the path and it’s only a short walk downstream to the Millennium Dome, which is now known as the O2. If you keep going, you’ll eventually reach the Thames Barrier – it’s about 4 miles from Greenwich. You can go the other way too, heading towards central London, although its about 7 miles before you get there!