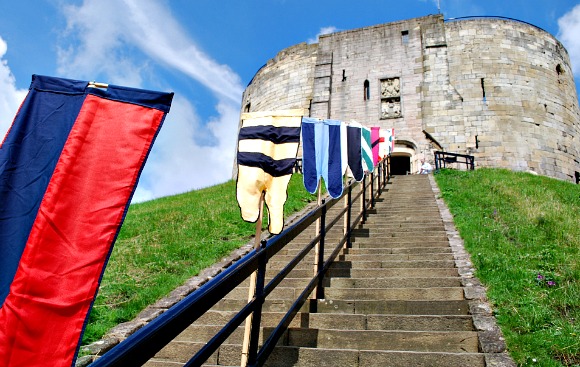 This tower is pretty much all the remains of what was once York Castle, but it’s become known not only for its history, but also for its terrific views of central York. The original wooden structure here was built by William the Conquerer, but was later rebuilt as the stone keep you see today. The site is operated by English Heritage and when you enter there’s a small courtyard with information boards explaining more about the building. Then there’s the opportunity to climb to the top of the battlements via the chapel – the only surviving room in the keep. The views over York are good, but not quite as good as the ones from York Minster. This is an extract from our free York City Guide.

York Castle developed over several centuries from the 1060’s to become a complex of buildings including defences, a prison, law courts and a keep (Clifford’s Tower).  It lost its military significance after an explosion in 1684.

When you visit Clifford’s Tower, you learn more about the history of castle and the significance of the keep within it from signboards dotted around the ground floor. When we visited, the King was there too and he was very knowledgeable about the importance of the castle and of York too. If he’s there when you visit, make sure you talk to him! After you’ve seen the ground floor, a spiral staircase will lead you to the chapel and then the roof top walk. Some of the stone in the chapel is reddened, signifying that the room was damaged by fire at some point but there’s not much else to see in there. The roof-top walk has a one-way system in operation as there’s not much room for passing up there. You may find that some foreign tourists don’t realise this and go the wrong way though!

All in all, we enjoyed our visit to one of the most historic bits of York. Don’t expect your visit to last a long time though! Clifford’s Tower is open daily from April to September between 10am and 6pm, and from 10am to 5pm in November. The rest of the year it’s mostly open only at weekends from 10am to 4pm. Adult admission is £4 (2012 prices) although we got in free with the York Pass.