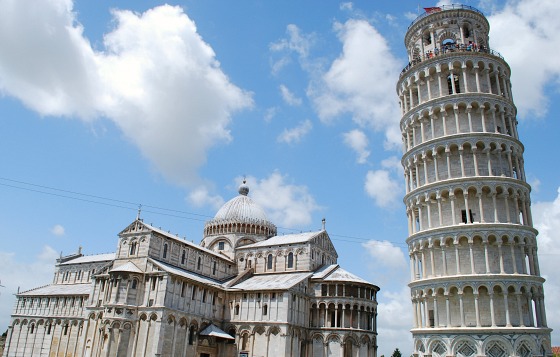 This is the icon that Pisa is most famous for, and it’s well worth a visit. The tower houses the bells for the cathedral and was started in 1173. Almost immediately it began to lean – in fact the builders were only on the third floor when they noticed it! The tower had quite a few years of closure whilst it was made safe and it re-opened to the public in 2001. Inside the tower there is a spiral staircase which snakes around the outer edges of the structure.  Climbing this stair case, really emphasises the tilt as you lunge from side to side – it’s a really surreal experience!  Once at the top, the view is magnificent over not just the Piazza dei Miracoli, but also most of Pisa itself.  Admission to the tower is by timed ticket, available in half hour blocks of 30 people and you’ll probably need to book ahead.  When were we’re there in June, the next available timed ticket was for 3 hours ahead but at busy periods you can wait considerably longer.  This is an extract from our free Pisa City Guide.

Tickets for the Leaning Tower can be bought from either of two dedicated ticket offices run by Opera Della Primaziale Pisana.  The main office is located in the building near the shop stalls – the entrance is under the clock.  The other office is near to the leaning tower.  Both are well signed. Adult admission is 15 Euros (2011 prices).  The Leaning Tower is open daily but times vary throughout the year as follows…

Bear in mind that it’s quite a climb to the top involving a stone staircase that gets smaller the higher you get.  There are points at which to stop and rest, but you will have to be out of the tower exactly half an hour after you went in.  When we last visited the tower in 2011 there was no lift, but workmen were carrying out building work inside the central part of the tower and we wondered if they were installing one.  Fancy visiting the Leaning Tower by Segway? You can on the Pisa Segway Tour which gets great reviews.

Busses 1, 3 or 11 will get you to the piazza dei Miracoli from Pisa Centrale station.

MORE ON THE LEANING TOWER OF PISA