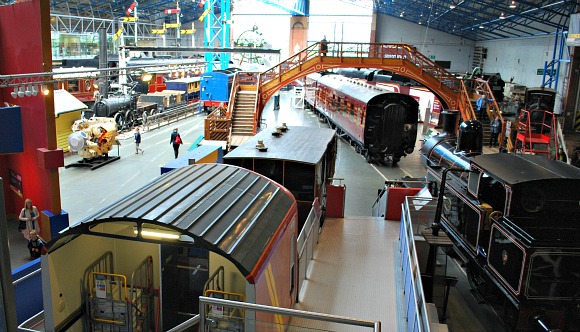 Some of the world’s most loved steam locomotives are housed inside a huge hanger-like structure at this museum. The iconic Mallard and the Duchess of Hamilton are shiny and polished, but you’ll find the Flying Scotsman in the workshop as it’s being fully restored and when we visited had just had a black undercoat applied. Also at the museum, there’s the only Japanese bullet train outside Japan, a collection of Royal Trains from over the years and a massive storeroom full of railway memoribilia. It will take you quite a while to see all of the exhibits and exhibition areas here and as admission is free, it’s worth going even if you only want to have a quick look. This is an extract from our free York City Guide.

If you enter the museum at the main entrance, the first part you come to is the Great Hall which is pictured at the top of the page. It’s here that you’ll find some of the iconic engines mentioned above and the Japanese bullet train. There’s also a large area dedicated to the way the Royal Mail has used the railways over the years and a small cafe. Off this main hall are several other areas to explore. In the Warehouse you’ll find an exhibition all about the Flying Scotsman, although confusingly the engine herself is not located here as she’s being refurbished. Also in the warehouse are endless rows of railway memorabilia from the steam years right up to the present day.

Head to the Workshop to find the Flying Scotsman (pictured below). You’ll need to look for a staircase that leads here, and it’s just behind the Royal Mail display. We last visited in 2012, and it won’t be long now before the Flying Scotsman is operational again.

When you exit at the rear of the Great Hall, you walk under the road to the next museum area. Here you’ll find the Station Hall which is packed with the Royal Trains and other interesting rolling stock and outside is the South Yard where there’s more rolling stock to see. There’s also a gallery of railway art and a minature ride-on railway to enjoy before you leave via the shop.

By its very nature, the National Railway Museum is not going to be for everyone, but we think you’ll enjoy it even if you only have a passing interest in trains or railway heritage. There’s plenty for kids to do and you can take it at your own speed. One other thing to bear in mind is that admission is free with support from the UK government, so if you’re a UK taxpayer, don’t be afraid to say no if you’re asked for a donation to enter. The museum is open daily from 10am to 6pm.

The National Railway Museum is located at the rear of York Railway Station. There are two entrances, one on the station side of Leeman Road and one further up on the opposite side of the road. The two sites are linked by an underpass within the museum.

MORE ON THE NATIONAL RAILWAY MUSEUM