We’d thoroughly recommend that you make the most of the proximity of Las Vegas to the Grand Canyon. Tour companies and hotels will happily organise this for you and you can go by helicopter, small plane or coach. Many of the trips will touch down and leave you time to enjoy the surroundings.

You need to decide what kind of trip you want though, and to help, this Free-City-Guides.com page offers independent advice on the possibilities and how to choose between them. The Grand Canyon is huge and different parts of the canyon give you differing views. Most trips from Las Vegas take you to either the West Rim or the South Rim…

WHICH RIM OF THE GRAND CANYON SHOULD YOU VISIT? 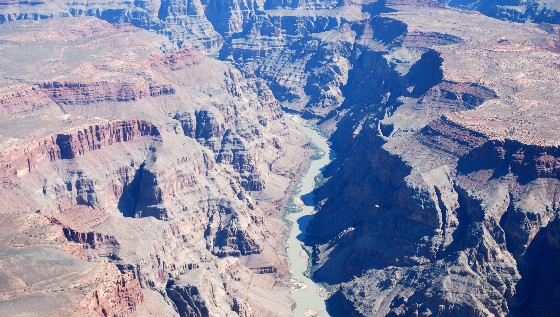 The West Rim (above) – This is the nearest rim to Las Vegas and is effectively the western edge of the Canyon before the Colorado River flows into Lake Mead. It’s here that you’ll find the glass “Skywalk” which curves over the edge of the West Rim. There are shops, eating areas and viewing areas here too. There’s no doubt that the Canyon here is impressive to see, but not as impressive as at the South Rim. 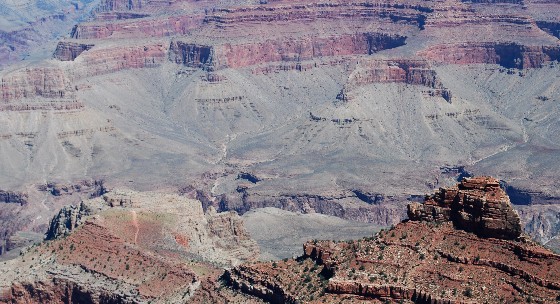 The South Rim (above) – It’s here that most of the pictures of the Grand Canyon you’ll have seen are taken, and we think the views are much better than the West Rim. The canyon is far wider and the erosion of the rock has many more colour layers. However, it takes much longer to get here from Las Vegas. There are number of viewing areas on the South Rim including the newly refurbished Grand Canyon Visitor Centre where the photo at the top of the page was taken and Bright Angel Lodge, where visitors have viewed the Grand Canyon since 1935.

WHAT KIND OF TOUR SHOULD YOU TAKE?

By Coach – This is usually the cheapest way to get the Grand Canyon, but you need to consider journey times. To the West Rim you can expect to be on the coach for 3 hours, but to the South Rim it’s more like 5 or 6 hours. Journeys are often broken up with a stop at Hoover Dam and there’s often Breakfast and lunch included.

By Plane – Many Grand Canyon air companies fly from Boulder City Airport near to Hoover Dam. It takes around 25-30 minutes to get the this airport from the Las Vegas strip and most tours include a hotel pick up. Bear in mind that you may be on the coach for a while as it picks up at other hotels before even travelling to the airport. Flight times from Boulder City are around 30 minutes to the West Rim and around 1 hour 15 minutes to the Sout Rim. Both rims have a small airport, so many air tours touch down and allow you to see the Canyon from the ground as well as the air. You can fly from Las Vegas to the Canyon too which cuts out the trip to Boulder City, but increases flying time. Most companies offer “High Wing” aircraft with large viewing windows so you can have an unobstructed view of the scenery.

By Helicopter – Again most companies offering helicopter tours fly from Boulder City, so you’ll need to factor in your journey time (see above). Flight times to the West Rim and South Rim are similar to the plane trips, but helicopters can do what planes can’t by taking you into the Grand Canyon itself. Bear in mind that helicopters have a lot of glass to look through, but if you’re in the middle seats, you’ll have to look past someone else to see. Some tours fly from Las Vegas Airport however which can save a little time. The All American Helicopter Tour consistently gets good reviews.

Combination Tours –  These are becoming more and more popular and you can now explore the Canyon in many different ways on the same trip. The most common combination tour you’ll find is an air flight to the Canyon, followed by a bus tour of photographic locations before flying back. Other combinations include helicopter flights to the Grand Canyon floor, rafting on the Colorado River, horse riding on the Canyon floor etc. Remember that when you start to look at combinations, prices start shooting up! There are great deals on top-rated combination tours at the moment.  See the details on our Tours & Activites pages.

MORE ON THE GRAND CANYON